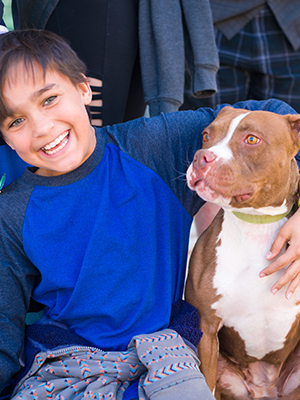 Pit bulls have been popular family pets in America since before the Civil War. In fact, they were so popular in the early 1900s through the 1950s they were the closest thing the United States had to a national dog. And yet, many people still have misconceptions about these affable, and often misunderstood, terrier dogs.

All Dogs are Individuals

The Animal Foundation’s Leid animal shelter adopts out thousands of dogs a year, including many pit bull terriers and we’re happy to report that pit bulls make great family pets. Like all dogs, pit bull terriers are individuals who are just as likely to be safe and gentle as any other dog. No breed or type of domesticated dog is inherently dangerous or aggressive. (As you may have read previously, “pit bull” isn’t even a breed at all. It’s a term that has evolved to describe a certain set of characteristics like muscular bodies and broad heads.)

The American Temperament Test Society provides a uniform program of temperament testing for dogs. In their temperament tests, pit bull-type dogs passed at a higher rate than many other popular breeds. Another peer-reviewed study found that nearly 85% of dog bite fatalities were from unneutered dogs. The most common secondary factors were:

The bottom line is that dogs, like people, are individuals. Treating them that way, and providing them with the appropriate care, training, and supervision is the best way to ensure a happy and safe environment your dog and your family.

Interested in adopting a pit bull or other dog? Search now to see available adoptable dogs at The Animal Foundation.

This is the latest in a series of educational blog posts made possible by Maddie’s Fund #ThanksToMaddie.

Is a Pit Bull a Breed?

The Popularity of Pit Bulls