We are devastated to share the news that Alexander did not make it. His injuries were just too severe.

We find comfort in knowing that Alexander died a hero, and we hope that you do too. As local news outlets have reported, Alexander sustained his injuries while protecting his owner from a vicious attack. He very likely saved his owner’s life.

Thank you so much for the prayers and donations for Alexander. We are overwhelmed with the kindness and love shown by our community.

Please know that any money donated to Alexander’s care went directly to his medical needs. Because of your donations, we were able to provide the absolute highest level of care to Alexander to give him the best chance at survival possible.

Any money received over what was needed for Alexander’s care went directly into our CARE fund to help other injured animals like Alexander who need special care in extreme circumstances.

Our hearts especially go out to Alexander’s owner during this difficult time. While this isn’t the outcome we all had hoped for, we can’t thank you enough for the love and support you have shown. 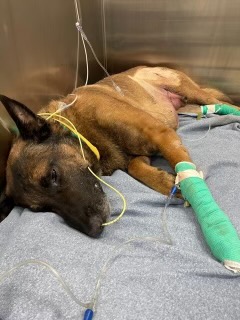 We know that so many of you are invested in Alexander’s recovery, so we wanted to let you know that he required an additional surgery this morning. Alexander was septic because the original surgery on his intestines failed, which is common with damaged tissue.

Thank you SO MUCH for all of your donations so far. They have ensured that Alexander can receive the highest level of care possible.

Alexander is a fighter. Please continue to send all of your positive thoughts to aid in his recovery. We know that you are all rooting for him!!

Alexander made it through his surgery yesterday, but he’s not out of the woods yet. He received a plasma transfusion this morning to increase his proteins and has been transferred to Las Vegas Veterinary Specialty Center for additional transfusions and around-the-clock care.

Alexander is stable but has a long road to recovery ahead of him. Please continue to send all the positive thoughts you can to this poor boy as he continues to receive treatment.

We are so thankful for the team at Lone Mountain Animal Hospital for the excellent care they have provided and to Las Vegas Veterinary Specialty Center for continuing his treatments.

We’ve been in contact with Alexander’s family and are expecting a happy reunion if Alexander pulls through and is able to leave the animal hospital. We are certain that his family was not involved in causing this harm to Alexander in any way.

We cannot disclose any further details of this case due to a pending investigation.

We are so grateful for the community’s support and for those who have already donated to Alexander’s care.

If you would like to donate, you can do so below. 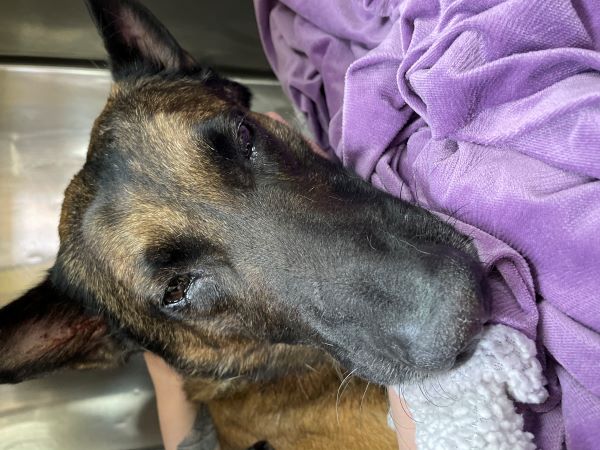 Poor Alexander was the victim of horrific cruelty. Animal Control brought Alexander to The Animal Foundation this morning with multiple stab wounds to his side, neck and front legs. We don’t know why or how anyone could do this to an animal, but we knew we had to help Alexander immediately.

Our Vet Services team quickly treated his pain and tended to the wounds on his neck and legs. When they examined the gash in his abdomen, they realized his injuries were critical.

Alexander was rushed to Lone Mountain Animal Hospital for emergency surgery. The stab wound to his side was so deep and so severe that they had to remove Alexander’s spleen and part of his intestine.

Alexander’s surgery was a success, but he will need to stay at the animal hospital for several days to recover with IV fluids and antibiotics.

We don’t know the details of how this happened to Alexander, but we are so thankful we were able to get him the emergency medical care he needed to survive this horrific attack.

Alexander made it through his operation, but his surgery was expensive, and his medical costs will continue to grow. 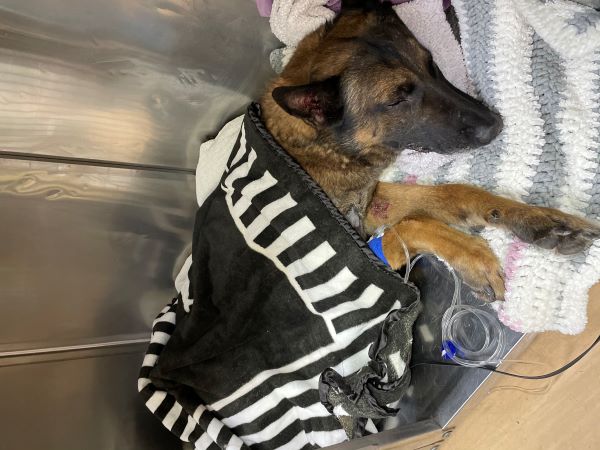 We know it is difficult to read about cases of cruelty like Alexander’s. But we thank you for your continued support of the lost, abandoned and abused animals that come through our doors at The Animal Foundation.

Can you help us provide the medical care Alexander deserves so he can continue to heal?

We established our CARE Fund for animals who need special care in extreme circumstances. 100% of all donations go directly to medical care for animals like Alexander who desperately need us. Become a CAREgiver for Alexander by donating below.